To develop a collection box and a direct mailer to raise awareness and funds for LifeLine - an organisation that supports victims who have suffered permanent injuries in bomb blasts that took place within Colombo and in the suburbs during the 30-year war in Sri Lanka. The campaign depicted the shattered lives of bomb victims with a jigsaw puzzle that carries the image of a person. These puzzles were attached to collection boxes and also sent out as direct mailers. Each puzzle was short of one piece. Therefore, the assembled puzzle shows an incomplete image of the bomb victim. The line read "your contribution could help him put his life together". Those who made contributions after receiving the direct mailer were sent the missing piece a week after the donation was received. In total, the LifeLine campaign succeeded in collecting a sum of Rs, 1,2 million within 4 weeks, and most importantly, offered hope to those who've suffered physical and mental injuries by being remembered not as victims but as survivors of the war. 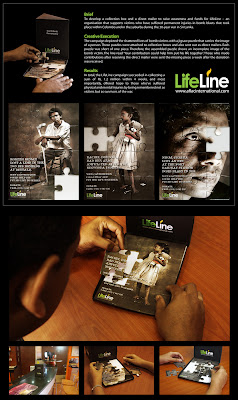 Posted by Marc van Wageningen at 11:45 AM