Optica Profesional "Take a good look before you vote"

Ecuador is the Latin American country with the most electoral processes in the past decade. 8 presidents in 12 year and 5 elections en the past 2 years which evidence a politic instability that has not allowed those in power a constant support in their administration. Optica Profesional took advantage of the last presidental elections this past 26th of April with a promotion to increment traffic to stores and generate a reflection of voters on the importance of choosing wisely. All communication was done with materials similar to those of political campaigns (posters, flyers) in store and the surrounding areas. In addition they created a candidate to reference the risk of choosing poorly. Their "candidate" paraded through various locations and it's campaign team distributed the material. There was an increment of over 600% in store visits on Election Day and the following week of activity. People on the street felt very identified with the message. 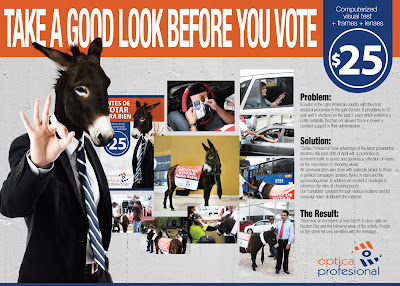 Posted by Marc van Wageningen at 9:30 AM