Ecobility "One bulb at the time"

With its unprecedented growth, the UAE has the highest energy consumption levels in the world. At the risk of making an irreversible negative impact on the environment, it was time for someone to take action. Ecobility needed to lead by example in every way if they were to fulfil their goal of having at least one Illume bulb in use in 1,000,000 houses in the UAE by 2009. From its energy saving function through to the materials they used in packaging it, they carefully planned each step in the creation of Illume to reduce the size of our carbon footprint. They made sure that Illume’s packaging was made from recycled paper and recyclable plastics. They even took the time to test which packaging dimensions allowed for more efficient shipment. In these ways, they showed Ecobility’s sincere commitment to saving the environment. Since its launch in November 16, 2008, more than 120,000 Illume bulbs have been sold. The latest to make the switch is the Starwood Hotels, saving them up to 1,000,000 KWH in electricity. 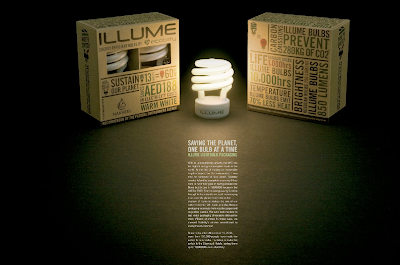