Not For Sale "Sales receipt"

In my country, a day's work couldn't get you anything more than a ride into town. So when I was promised an education in exchange for work in the fields, I felt lucky. No one in my family had ever been to school. And by the time I saw them again, I hadn't either. I worked 14 hours a day. 472 days in a row. For a man who beat me if I didn't. And the only thing I learned was that slavery still happens. 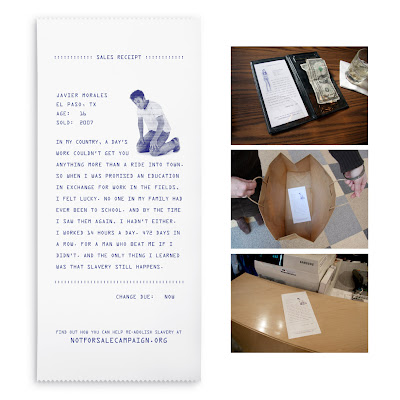 A receipt would mean a paper trail. And then someone would know I was sold. To three men one day while my sister was at work. For half a month's rent, her boyfriend let them take me. I was 13. They beat me. So I would understand who was boss. And they raped me. So I would understand my job. Sex sells. I'm living proof. But the only receipt is the body I wish I no longer had. 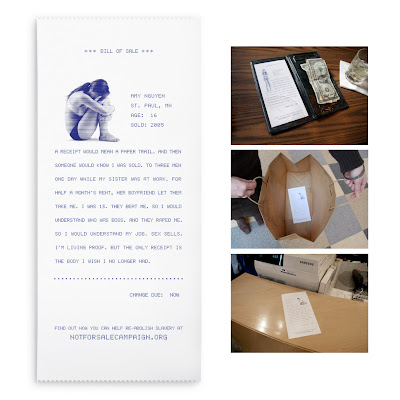 They were selling the American dream. And I bought it. They said I would live with a nice family in New Jersey. That I would go to school and help take care of their kids. Instead, I was kept in a room with 5 other girls. And sold for sex to anyone who would pay. I should have known better than to believe what they said. My grandmother went to Auschwitz. They said she was going to take a shower. 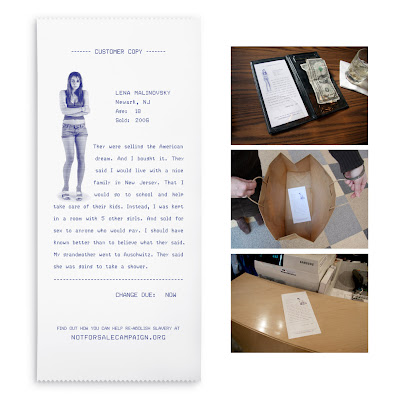 Posted by Marc van Wageningen at 8:12 AM