Alarming new statistics show that the line between man and ladyman has never been blurrier. Men are now spending more time shopping, going to day spas, talking about their feelings, and worst of all - even waxing their chests. And it's not just the average man on the street that's undergoing this evil transformation, even our favourite sporting heroes have fallen victim. But thanks to our friends at Solo, the real man thirst crusher, help is on the way. Now, every sports supporter can beat their chest in true man style with the Solo Man Bib. Designed exclusively for the Australian international Twenty/20 cricket series, the Solo Man Bib helped "mansform" supporters from all teams into pectoral pounding hirsute man beasts. As well as being the must-have accessory for all supporters. the Solo Man Bib was also the official uniform for the hordes of fans competing in the world's first Chest Test a unique sports event that put man against beast in the ultimate fight to the death (well, hiccups) in a Solo sculling competition. 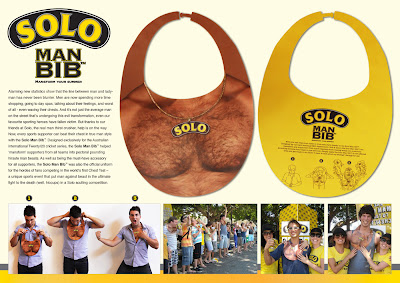