Friends 91,9 FM hosted a unique radio show - whereby listeners could become RJs and host the show from home, by simply dailing in to the station. The intention was to generate enthusiasm and awareness for this show in Calcutta. Gigantic microphones were suspended from atop residential buildings, just outside the windows in the busiest parts of the city. There was a supporting billboard which only amplified the message. Over the next few weeks 5826 listeners called in and the show went on to become a huge hit, increasing channel share considerably. Three of the listeners even realized their dreams of becoming actual RJs. 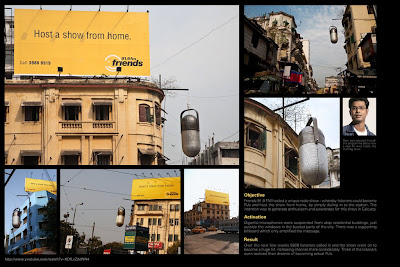 Posted by Marc van Wageningen at 9:04 AM