The goal was to capture donors and volunteers for Estação Bem Estar: lodging that shelters, treats and reinserts homeless people from the streets of São Paulo City in the society. They photographed touristic points of São Paulo, like Catedral da Sé, where there is a large concentration of homeless people in the area. With the photos, they created postcards that show not only the beauty of the place, but also its reality: homeless people. To create impact and incomes, they made a partnership with newsstands and bookstores in order to sell these postcards together with other conventional postcards. 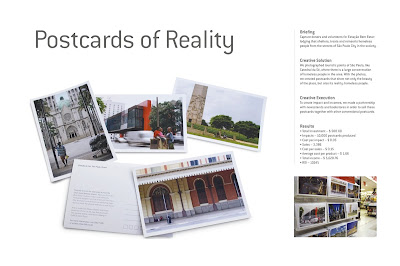