Raise awareness of domestic violence. To motivate people to look more closely in future and help prevent domestic violence. Let people directly experience how domestic violence is hidden from view. The world's first billboard wich reacts when people look at it. An "eye tracking" camera connected to a digital billboard. The billboard displayed a man beating his wife - as long as nobody was looking. But as soon as somebody looked directly at the billboard, then after a brief, pre-proframmed time delay, it changed into a photo of the same couple pretending to be happy. The billboard made observers part of the situation. Some of them interacted with it for several minutes. Every contact left a strong impression. many newspapers and blogs reported on the campaign. 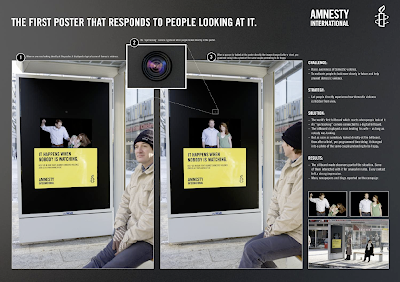 Posted by Marc van Wageningen at 11:40 AM