The objective was to generate awareness and, consequently, demand for the Ready-for-Delivery service (special promotion from the CasaShopping furnishing mall, where clients would take the furniture or have it delivered within 2 days). Usually a ready-for-delivery promotion is confused with a clearance sale and architecture/interior design bureaus are not interested in participating. The challenge was to add value to the fast-delivery service in a way that would architects to turn it into a benefit for their clients. Rio de Janeiro architects on CasaShopping's data bank and those who had never used the service were selected as the target. A direct mail object in the actual size of the furniture was created and left at the doors of a selct group of architects. By pulling a tab, a piece of furniture appeared. On the reverse side, a message to the architect/interior designer informed that, neither they nor their clients would have to wait anymore before having their houses furnished: CasaShopping would deliver the items as quickly as that piece of furniture had appeared at their doors. Besides the message, there was a list of participating stores, the promotion period and small photos of other furniture in the catalog. A Creative Audit by telephone, on the week after the sending out of the action has shown: out of 91.89% of the contacted people, 94.99% recalled the piece. Out of the latter, 87.74% recalled the promotion and 2.15% had used it. 70.97% have reported that they intended to participate. After the end of the promotion, they crosschecked the list of adresses and the list of architects who had purchased during its period. There were 263 names in common. That is 57.68% out of the total of impacted consumers bought during the promotion (12.17% of them, more than once). 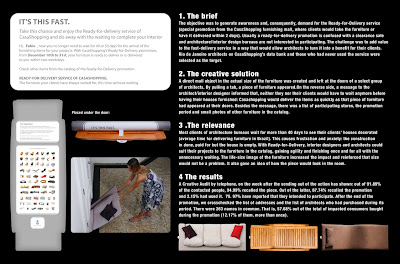 Posted by Marc van Wageningen at 10:07 AM