They are characters that work day by day in an agency and they seem to be taken out from another world, full of a unique enchantment like no other work. Yes, this is who we are, like brought out of a tale, one more protagonist than others butt all with good lines on the script. The individual photo sessions for each one of the 80 characters of their agency, the costumes such as the best dress, sack and even wigs, that also included the smell of that time. To have a card with your own picture is more than that. It's your essence, is what it sells. Each one of them is an image and a part the ZEA BBDO's DNA. Each card is a part of their history, it's a portrait of this film in wich thousands of scenes are filmed every day and the script is written by them. Why a change of image? They must have fun, they need to feel excited when they give their cards and see the envy face of others that also work in this profession, but they've got a conventional card that only smells of ink, smells of boring printing. 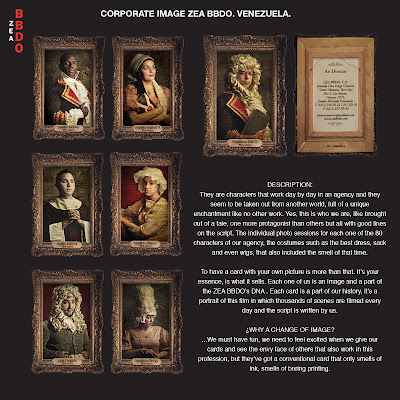 Posted by Marc van Wageningen at 10:01 AM