All over the world, governments exert too much control over the press. They were asked to draw attention to these violations of the right to free speech, and to do it as cheaply as posible, since the "International Society for Human Rights" needs every cent it has for the battle against censorship. They substituted the bright yellow ink of a highlighter pen with dense, black ink and distributed these modified pens to journalists attending a press conference held by the ISHR on the subject of 'Freedom of the press at the 2008 Olympic Games'. Instead of highlighting a text, the marking pens left behind a censor bar on the paper. Shortly after the press conference, the site views of www.igfm.de, the german department of the ISHR increased by 28%. They also received 50% more requests than usual from journalists seeking informative literature about censorship. 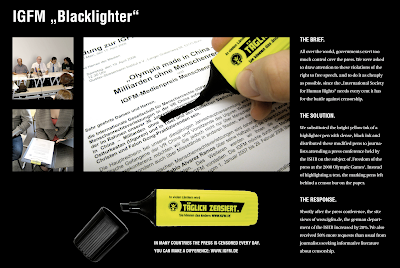