An increase in car thefts in the city had people worried about car security. And for Batra Auto Company (dealers of Murati - India's No.1 car company), it was the right time to push the genuine Maruti authorized car security systems. So the brief was to simply remind people how they could keep on driving their favourite car by securing it with genuine Maruti security systems. They had a simple solution to the problem. And the key to it was simply put, the "key"! They made some dummy keys that would fit in most Maruti cars and left them hanging from the door of cars parked in parking lots, outside apartment blocks, office buildings and so on. So that when the owners came back to the cars, it looked like someone was trying to tinker with the locks. A scary thought at that! And the tag attached to the key warned of the fact that next time they might not be as lucky! Thousands of enquiries, wich eventually led to a 130% jump in sales of genuine Maruti systems by Batra Auto Company. And that too in the first month itself. This activation also led to consumer affinity and goodwill towards Batra Auto Company. The only ones left unhappy were the carjackers! 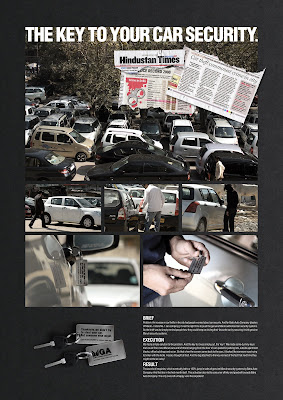 Posted by Marc van Wageningen at 8:19 AM