Reinforce Virgin Mobile's popularity amongst young adults. Virgin Mobile's rates are low. So dangerously low that they are open to blatant abuse by the public. Given half a chance, people will use their mobiles in a thoroughly irresponsible manner just because it's cheap, even when explicitly requested not to. A contrived photo of Jason Donovan and his mobile number was leaked onto the internet and into the media, he was inundated with calls and texts from fans and foes. In response, Virgin Mobile set in motion a pseudo damage limitation campaign urging people to refrain from calling or texting 0403JASOND: "PLEASE ENJOY VIRGIN MOBILE'S LOW RATES RESPONSIBLY". This viral activity generated over 11,000 calls/texts in three weeks, once the campaign broke over 60,000 people visited www.responsiblemobileuse.com.au and over 670,000 calls/texts were made to 0403JASOND. 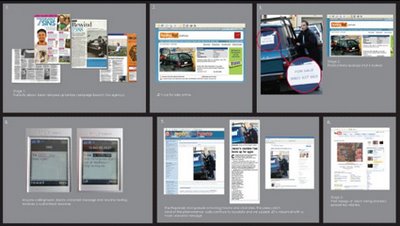 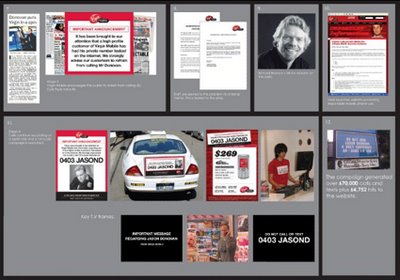 Posted by Marc van Wageningen at 9:48 AM