Bring the One Second brand to life for consumers and emphasise the produtct's core characteristics: tiny mints that produce superior freshness. The One Second snow cannon. In Winter 2008, this artificial snow machine was installed on a temporary dry ski slope during an event One Second was sponsering in Ghent. In addition to getting the brand right into the heart of a big family event, attended by thousands, the One Second snow cannon also perfectly captured the brand's core promise: Superior Freshness. 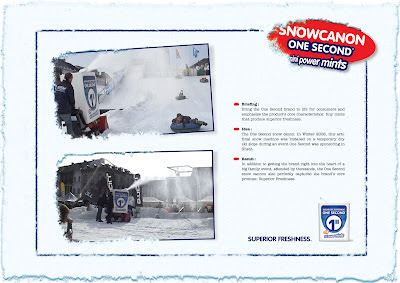