The brief from the client was to develop the campaign against speeding and agressive driving and in that way reduce the number of car accidents and people killed on the roads. Target audience were those who consider the speeding kind of lifestyle - the protest to existing speed limits, not people who are exceeding the allowed speed for some 10km/h, but those who are playing hide and seek with the police. Organ Donors Certificate was developed as a part of the campaign. Agency analysed that the reason for speeding is very social, fast driving is considered to be cool among large groups of the society. Since lecturing would not work for grown-ups it was necessary to shock the target audience. Another social problem - shortage of organs needed for transplantation was found and during the campaign agressive drivers were asked to sign their organs to those who are waiting in rows for transplantaton operations, by signing Organ Donors Certificate. Certificates were issued directly to aggressive drivers during raids by the Latvian road traffic police. Number of victims dropped by 29%. You may ignore the ad, but you will always remember the day you signed your Organ Donors Certificate and devoted your organs to somebody else. Campaign raised as well the discussion of another social problem - the sortage of organ donors, Transplantation Center was very thankful and client had nothing against combined solution, since the main task was to save lives. 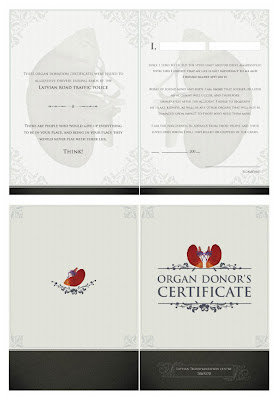