Beginning July 27 and continuing for three weeks, passersby in Chicago’s Jackson Tunnel will be greeted with an out-of-home message, “Our potatoes are grown closer than you may think,” along with an overhead installation of potatoes breaking through the ceiling tiles. It’s part of a nationwide campaign for Lay’s potato chips that broke in May and which celebrates the local potato farmers who grow potatoes used in Lay’s potato chips. The “Lay’s Local” 360 marketing campaign was created by Lay’s U.S. agency of record, Juniper Park. Other elements of the campaign, which debuted earlier, include TV, print, online, on-pack and in-store. 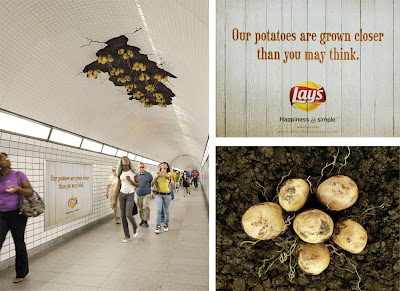