Maintain a relationship with the Philadelphia Phillies organization in hopes of securing more projects with them in the future. While in the middle of the playoffs, instead of sending the Phillies a congratulations card, they sent them an interactive experience. They created a digital Colonial war map depicting cities where the Phillies had won clashes, with each location marked by a red cannon. Click on one, and you are engaged with colonial battle footage or quirky animation which has been edited to some heart-pounding, play-byplay audio. In addition to sending this to them on a disc in a custom box, they also posted it on a microsite: http://tierneyagency.com/congratsPhillies/. The Phillies won the World Series. Coincidence? Perhaps. 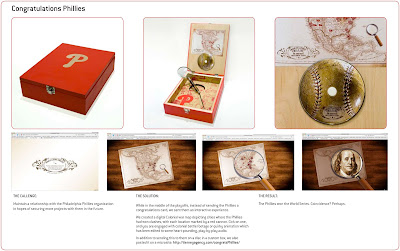