Tell drivers and other road users in the city that aggressive behaviour is not a solution. Instead of telling drivers not to be aggressive, the agency produced 20,000 stress balls and leaflets depicting a motorist, a pedestrian, a cyclist or a motorcyclist, which were distributed by Brussels police officers. This playful and interactive medium not only puts a smile on the road user's face, it also allows him to redirect his anger when really necessary. The campaign got huge positive press coverage in newspapers and on radio and television. 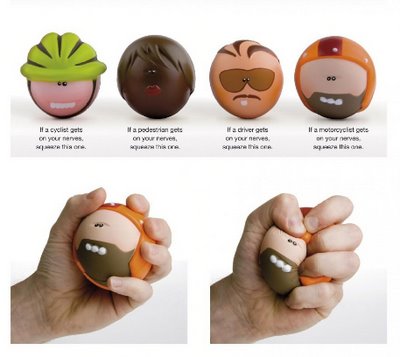 Posted by Marc van Wageningen at 9:05 AM