Pony Malta is a drink for young people with a high nutritional contents and thanks to that it has been able to take hold of the concept: Only those who drink Pony Malta are better prepared. The idea was to create a promotion in which the prizes would help university young students to be better prepared for the day-to-day and nothing better than to give away personal computers and USB keys for them to transport their files. They discovered that the best way to reach them was neither the television nor the radio and much less any other conventional media. They needed something new, something that other brands would have not used, and they found a space everybody had ignored and that would rotate from hand to hand at universities: The photocopies. The idea was simple. They gave away to stationery stores entire paper blocks for photocopiers. Each of the sheets of paper they gave away had impressed on their back our promotion. For the owners of the photocopiers it was a good deal, since the sheets of paper was free. With regard to the students, as it was a photocopy on “used” paper the price per copy was lower even if they made it on a completely white sheet of paper. The results were in quick. More than 62% bottle caps were redeemed during the 3 months the promotion lasted. In addition, Pony Malta’s consumption at universities increased 34% points in relation to the previous months of this activity. 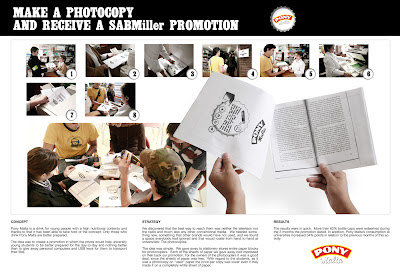 Posted by Marc van Wageningen at 10:54 AM