Rolls-Royce dealers in the United States needed support in selling the Rolls-Royce Phantom. Prospects were rejecting it because they thought it was just too big, brash and overpowering. They needed them to reassess it. Focus on the craftsmanship and Englishness with a Proposition: "Hand- made in England". To demonstrate this, they sent them a work of art by the man at Rolls Royce who paints the "coachlines" along the side of the car. This came complete with a Certificate of Authenticity to prove it was an original work of art. They also included a seven page letter because we wanted to tell the full story about the craftsmanship. (The very fact that we'd taken the time and effort to craft a seven page letter also differentiated Rolls-Royce from other car companies). This was a real breakthrough. Prior to this, none of the 29 Rolls-Royce Dealerships in the US had ever agreed to participate in a dm programme. Everyone of them signed up. They are only six weeks into the programme but so far there have been 15 leads. The car sells at $500,000. So you can see why Rolls-Royce are very excited about the results of this campaign. 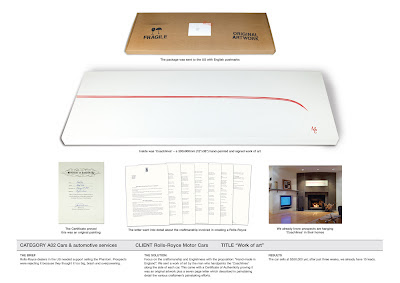