Increasing right-wing radicalism is a problem in everyday German life. The campaign Loud Against Nazis trys to remind people of the situation whereever possible. The task was to activate people to do something against neo-Nazism: to have a look at the website of the Loud Against Nazis and to engage themselves in the movement. The objective is to get radical right-wing tendencies out of sick minds. A good deed at breakfast time: Eggcups against right-wing radicalism, potential partners, sponsors and supporters of the Loud Against Nazis movement are mailed a re-designed eggcup, together with the call to spread the words as Loud as possible, and recruit new supporters. A small daily reminder, to get propaganda out of neo-Nazi heads. Already thousands of crushed eggs. With many more to come. 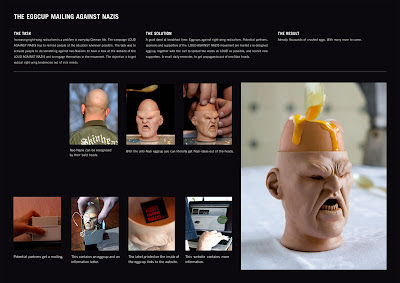 Posted by Marc van Wageningen at 10:08 AM