Their brief was to promote the book and find a unique way of launching it. The key insight fot their promotion is that in the South African culture, mothers often carry their young children wrapped in a blanket around their backs. Their solution: piggyback on one of the world's most innovative and self-promotion gadgets - the Apple iPod. Step 1: Leave a message on the iPod that was taken from five different stories in the book and create an audio book podcast, with photographs, so people can get a taste of A Mother's Legacy. Step 2: Package it so that people have to take the mother away from her baby to hear her message. Step 3: Put an iMovie of the "Behind the Scenes" video of A Mother's Legacy on the iPod. The responce that they recelved was that all of the limited edition Mother's Legacy iPods were sold out and a further 1400 are now in production. 1.500 Mother's Legacy books have been sold so far and more than 30,000,- has been raised for The Tomorrow Trust in just two months. 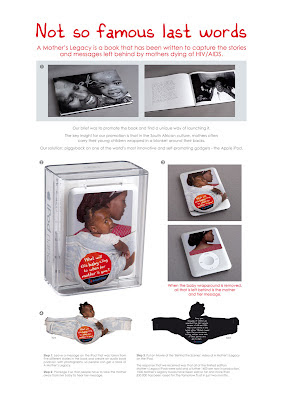