When PEPSI MAX specifically asked them for a brand activation campaign involving computer games, aimed at the general public that would want to "MAX their life", they saw their change. A change to work around the much debated media fragmentation and clutter, to fully use the potential of social networksites and create powerful mix of online and offline experiences. They invented the MAX'ed out version of the classic game "4 in a row" and played it on a board, 12 meters high and 15 meters wide, with real people as discs. They launched it as a viral hype and the rest is history. At first they went undercover, organizing an unbranded, live gaming experience with both local and international participants recruited online. Closely monitoring the blogging community and the social networksites they opened-up a-still unbranded-game site, called 4MAX. When the fuzz reached an all-time high, GunkTV was granted the reveal scoop. At the same time a new website, branded this time, was revealed, where gamers could compete each other for a place in the live offline finals to be held on September 22nd in Antwerp. To be continued. Up till now more than 100.000 gamers visited the 4MAX game site, while the offline finals still have to be played. 75% up to 80% of the site visitors actually played the game online. On average people spent over 10 minutes on the website. Their banner campaign generated a whopping average CTR of 1,6%, with peaks up to 8% for certain formats (market average: 0,3%. More than 20.000 views on YouTube. Free publicity on the HLN.be homepage, Frensh TV and a lot of echo's within the blogging community. 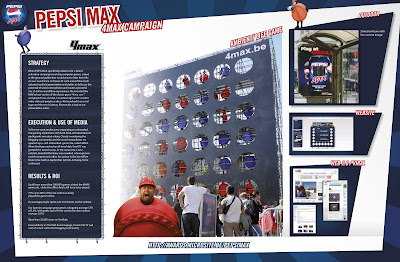