Create awareness that there is help for severe cases of perspiration and body odour in the form of Right Guard body spray. Their target group: men and women who don't want to work up a sweat. On busses and trains lots of people are usually closely crammed together. That is why they installed a special kind of rescue system. In cases of perspiration emergency Right Guard was there to save everybody from unpleasant body odours. And for the more severe cases victims were able to call them on their emergency hotline to ask for free samples. The campaign caused a furore and generated a large amount of interest with an average number of 800,000 contacts during the two-week campaign. Since then over 6,500 product samples have been ordered, making it the most successful media campaign of the year. 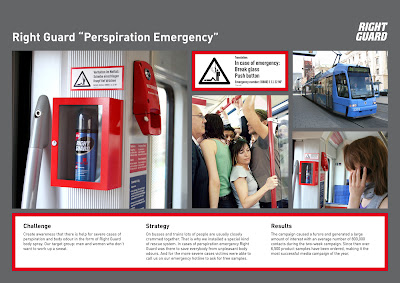