In Australia, Stella Artois was the #1 international draught beer. But the brand had a long way to go before it caught up with local brews such as Crown Lager or Victoria Bitter. So Foster’s created a new sales team to concentrate on selling Stella Artois. Although this team was aware of Stella Artois’ origins, it didn’t have a good understanding of the brand’s character or its association with film. Their job was to produce a sales presenter that would get the team excited about Stella Artois, and make it easier to sell the beer to pub and bar managers. Foster’s was expecting a brochure, or a folder with loose-leaf pages. They gave them 50 customised Sony PlayStation PSPs instead. The PSPs were delivered in hand-stitched black velvet drawstring bags. The machines were rebranded with a Stella Artois logo on the reverse of the case, and they also modified the operating systems and icon sets to reflect the brand. Then they installed the Stella Artois films and artwork, plus short presentations on the history of the brand. And because PSPs are wi-fi capable, Foster’s can load up new material quicker than new pages can be printed for a loose-leaf folder. Foster's analysis has shown that every sales representative who was given a PSP met all their sales targets for the relevant quarter. Anecdotal feedback also confirmed that without exception, the PSP was regarded as the best sales presenter ever received. As a result, Foster's is now reviewing further rollout of the tool. 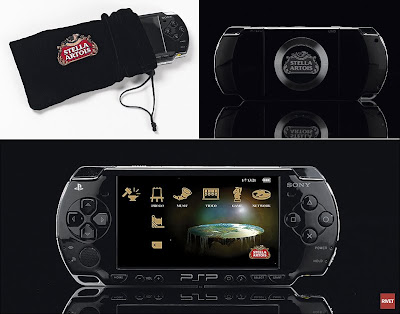