In a Telecom landscape dominated by two top gogs (Telenet & Belgacom), Scarlet aims to be the proverbial third dog. The problem is that their marketing budget is less than 5% of that of the two market leaders. So they came up with a bold strategy during their national elections: they would make their prime minister claim that this time he would "vote red". Knowing that he is a die-hard liberal supporting the deep blue colours, him switching colours would surely grab the voters' attention. They used a famous voive imitator and a spitting image doll. The combination results in a verry funny viral movie in wich their prime minister speaks directly to you to announce that he will "switch and vote red". After this funny intro, it is revealed that he "votes" Scarlet and switches to their superior online & telephone offering Scarlet One. In the course of the movie, Verhofstadt also picks up his phone and makes a call. At wich point your own cell phone rings and he talks to you directly! Imagine your surprise. In just two weeks of election Frenzy they generated 80.000 visits. Average visit time indicates that 90% of visitors views the complete video. Almost 10.000 personalized e-cards were sent out. Almost 6.000 prospects left us an opt-in asking for more info and 2.500 of them left them their cell phone number. Scarlet sales were up significantly (figures can't be disclosed). 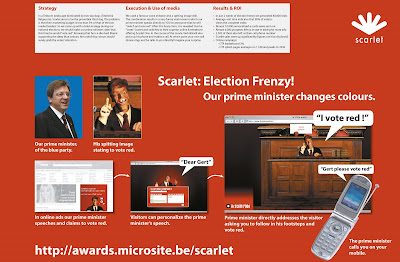