Everyone has something to hide. That’s the theme for the third season of Big Love on HBO. And it’s also the idea behind new interactive murals created to promote the show by BBDO-NY. These murals, launching in New York and Los Angeles the week of January 5th, feature snapshots of people walking through a city street. Headphone jacks are built into each person’s head, so that passersby can use their headphones (or those provided by street teams) to plug in and hear each person in the mural’s inner and most personal secrets. These secrets range from the innocuous (i.e., a woman who’s in love with her boss) to the dramatic (i.e., a woman who is hiding her drinking problem from her husband or a man who is planning to leave his pregnant wife for someone else). In addition, when people plug into the headphone jack near the logo, they can hear a trailer made up from some of the most dramatic clips of the upcoming season, in which secrets abound amongst all the main characters. Big Love’s season kicks off on January 18, 2009. 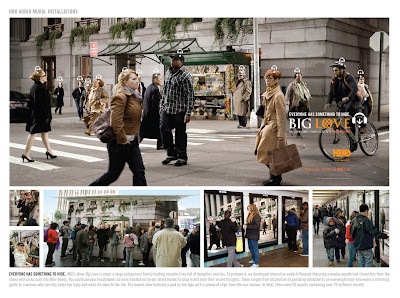