Heineken was the official beer sponsor of the 2008 Austin City Limits music festival. But Shiner is the local favorite. How do we keep Shiner top of mind, when we aren't allowed to advertise inside the festival? Stand outside the festival entrance and hand out free koozies. After all it's hot out and texans love keeping their beer cold with a koozie. But these koozies do more than that. Since they look exactly like a can of Shiner Bock, festivals goers look like they're drinking Shiners instead of Heineken, and they get a kick out of snubbing the corporate sponsor in favor of their beloved Shiner. 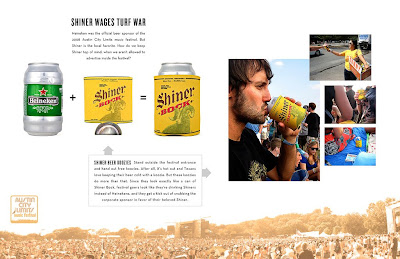