The Federal Ministry of Transport, Building and Housing wants to raise awareness for the dangers of driving under influence. Drivers should be approached as directly as possible but in a rather entertaining than shocking way. The long-term goal is to reduce the number of alchohol provoked accidents in Germany. A fleet of Volkswagen New Beetle is tuned with special car parts to become talk of the town: Wheel caps that looks like eyeballs play with the New Beetle's organic forms and turn it's silhouette into a human's face with drunkenly revolving eyes. The promotional cars were used mainly at public events with a high con-sume of alcoholic drinks. They made people curious for the ministry's information material handed out on these occasions. The promotion caused quite a sensation in the media. The national press reported on the events and even more important on the ministry's information campaign. As a direct result the ministry noticed an increased demand for their information literature about driving safety. 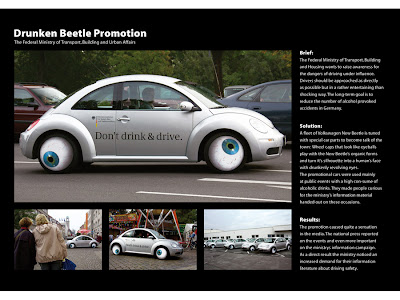