Adidas was an Official Partner of the 2008 Beijing Olympics and their brand positioning was – ‘When 1.3 billion people get behind their athletes Impossible is Nothing.’ The agency in Hong Kong was briefed to create an original print campaign to extend the adidas China Olympic corporate campaign; one that would specifically reflect and support local Hong Kong athletes. Hong Kong's greatest medal hopes were tabled tennis dua, Ko Lai Chak and Li Ching, they won silver at the Anthens Olympics. Through the adidas website they invited the public to be photographed playing table tennis shots like their heroes. All the best poses were then bound to make a flip-book and mounted against a stadium background on youth magazine, Milk. The double-sided flip-book perfectrly captured the essence of the brand idea, that athletes are made greater by the people's support. 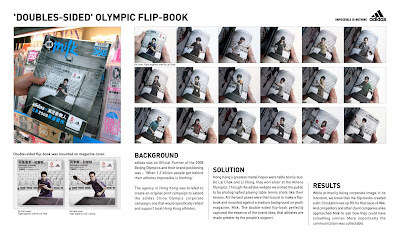