First interactive advertising system premiere in Bulgaria amused its viewers in may at one of the most crowded places of the capital - the Mall of Sofia. The system is an extension of an advertising campaign for an anti-wrinkle beauty product by the Actavis pharmacy company. Special software and cameras recognizing the movement of your hand smoothing woman's skin on the screen as easy as a child game. Added value of the interactive performance were the children who attracted by the system drew in their mothers as well. 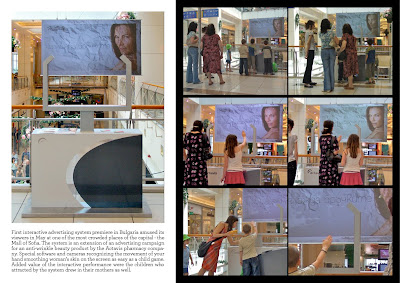 Posted by Marc van Wageningen at 9:54 AM