Adidas "As One" magazine cover.

In Hong Kong, European football has a close and keen following at both club and international level. Adidas, being the leader in football, looked to be the leader in exciting fans about Euro 2008 and in doing so, sell Adidas Euro 2008 merchandise. As with any team sport, it is recognised that any profesional player is only as good as the team around him. Hence Adidas's positioning "Together as One" So to build the hype around Euro 2008's Adidas sponsored teams, a special magazine cover was created. June's issue of Hong Kong's hottest youth magazine, Milk, hit the newstands. The cover looked simple enough, but when it was opened gatefold after gatefold revealed a full team of jerseys, all joined in unity. The magazine execution was a great succes in raising awareness that translated to sales. The Adidas Euro 2008 target sell-trough rate was set between 30-40%, however the Euro Federation Jerseys sell-trough rate achieved 54%. 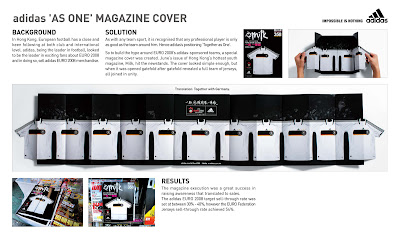