Adidas "As One" miniature football game.

In Hong Kong, European football has a close and keen following at both club and international level. Adidas, being the leader in football, looked to be the leader in exciting fans about Euro 2008 and in doing so, sell Adidas Euro 2008 merchandise. To build the hype about the tournament's Adidas-sponsored teams, a special magazine cover was created. In "Touch" magazine, an unprecedented miniature football game was packaged as a premium to get fans involved. Readers could adopt their team and play by flicking the ball, like a table-top coin game, into the goal. The magazine execution was a great success in raising awareness that translated to sales. The Adidas Euro 2008 target sell-through rate was set at between 30-40%, however the Euro Federation Jerseys sell-through rate achieved 54% wile the Euro Match Ball achieved a 51% sell-through. 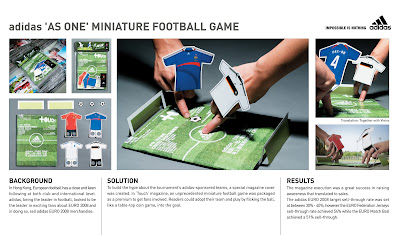