With a 2:00am lockout trail in force in Melbourne and the goverment accusing clubs and bars of promoting binge drinking, they recognized an opportunity to help launch Spring Valley's new range of vitamin-infused mineral waters with an ambient idea like no other. They opened Australia's first "Water Only" bar. The Smart Water Bar. Melbourne was faced with a late night dilemma: a largely unpopular lockout that saw most licensed premises in the inner city ordered to refuse entry to patrons after 2:00am. The Victorion Goverment expressed the intention to make this lockout permanent. Stepping in to breach the gap, the Smart Water Bar offered not only an awesome late night venue but also a sensible alternative to alcohol. Situated right in the middle of Melbourne's night life precint of Prahran, a culting edge, purpose built space became Australia's first "Water Only" bar for a month. With capacity for approximately 80 people, the Smart Water Bar featured mod grass flooring, lush green surrounds, live entertainment and free Spring Valley Smart Water. The Smart Water Bar provided sanctuary for late-night revellers locked out of licensed venues under the city's 2:00am curfew and operated at full capacity during this time. 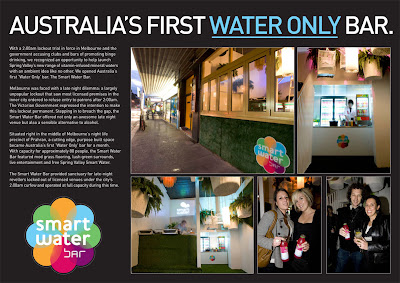