In 2007 the Adidas sponsored All Blacks suffered the most unexpected defeat at the Rugby World Cup. The challenge was to reconnect a disillusioned fan base with the team and strengthen Adidas’ brand position in the process. To do this they needed an idea that would get fans closer to the All Blacks by registering their support in a new, innovative and disruptive way. The insight was that the strength of the fans relationship was in the enduring power and legacy of the All Black jersey. The promotion was an integrated campaign where the jersey itself became message and medium. An interactive promotion invited fans to sign a virtual jersey thread. In a world first they then used nanotechnology to imprint the names on to a real thread to be sewn into the captains jersey. Alongside this was a unique chance for babies born on a 2008 test match day to be gifted a special All Blacks jersey, capturing a new generation of fans. The campaign took on a life of its own generating blog stories around the world and over 25,000 google results. The New Zealand media ran the campaign as the lead story in the primetime news bulletins and it made the front section of the major metropolitan newspapers. The website generated traffic from over 150 countries. 68% of NZ babies born on test match dates claimed their special jersey. Interest in the All Blacks was restored with research showing 18% more fans expressing interest. Ultimately, almost 10,000 fans got to have their name nano-imprinted into a piece of All Black history. Never before had sports fans had such an interactive and tangible way in which to become a part of their favourite team. The promotion would literally stitch the fans into adidas product and All Black history, deepening the relationship between the fans, adidas product, and All Blacks team. Additionally, they were giving the new generation of fans a special memory and affinity for the adidas brand they would carry with them for the rest of their lives. Gold Cannes Lions Promo Winner. 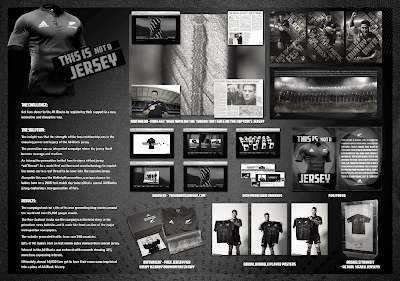 Posted by Marc van Wageningen at 11:58 AM