Every year Stella Artois organizes the World Draught Masters: A worldwide championship to reward the person who taps the perfect Stella Artois. They went out on the streets with a mobile bar and tap to let people have a go. They couldn't, however, afford to have people spill our reassuringly expensive beer. Since tapping the perfect Stella Artois consists of 9 specific steps, practice is required. Things like cleaning the glass, holding it at a 45° angle, avoiding the last drip of beer coming out of the tap, make this quite a challenge. They saw that all those 9 steps could actually be demonstrated using the Wii controls. One controller acts as a glass, the other as the tap and later, the knife to take out the excess foam. They recorded the tapping process with multiple ‘error’ levels such as holding your glass to straight would result in a beer with too much foam. Their mobile bars they fitted with flat screens, a computer and a set of Wii controls. People would try to tap a virtual pint before they could try the real Stella Artois. The 9 step pouring ritual is really important for Stella Artois. For example, if you don’t hold your glass in a perfect 45° angle, you don’t have a perfect Stella. It’s part of their heritage. The Wii controls allowed us to demonstrate and control every step in detail. It was also a way to avoid spilling our reassuringly expensive beer and dealing with social responsibility. During a period of 2 months, more than 20 events were organised. Per event, hundreds of people could take up the challenge. People could try as much as they wanted without spilling a single drop of beer. Once they proved to have the skills, they could try their skills on a real tap and earn a place in the local semi-finals. Bronze Cannes Lions Media Winner. 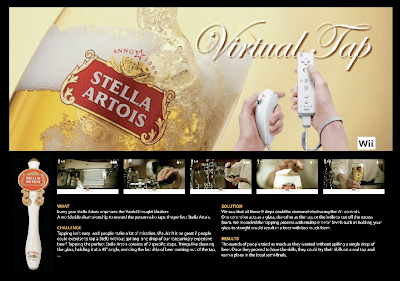