Atrápalo is an online travel agency. 'Atrápalo' means 'Catch it'. The objectives were: To make the brand more relevant for the consumer. To differentiate Atrápalo from the other Spanish online travel agencies, associating the brand with its differential values through an engaging media campaign which is truly close to the user. To communicate the product. To relate the brand with the product it markets: “discoveries” for vacation and urban leisure. To gather registries. To increase the client database with a participative action which is linked to an attractive incentive. Atrápalo created a plague of “trappers”: strange creatures of digital origin which appeared on the internet and in the real world. The plague was communicated through press, billboards and radio. On the internet, Atrápalo purchased 80 million printouts which it did not use in order to insert banners, but instead so that users could find these strange creatures while surfing. The brand appeared to communicate that the “trappers” contained Atrápalo products and a great hunt was unleashed. Users began to look for “trappers” in order to capture them, store then on a website and then return to look for more. Three weeks later, the plague was exterminated. The plague was exterminated in 4 weeks. 80 million “trappers” were found and 1 million were captured. 1,300 Atrápalo products appeared (trips to Australia, Brazil, Egypt, Cappadocia or the Caribbean). The “trapper” CTR in the media plan was 1.32%, while on the more than 100 sites which proactively requested “trapper” banners the CTR turned out to be 28.24%. The campaign had an impact on 100% of the target. 750,000 unique users became engaged in the story and Atrápalo gained 75,000 new registered clients. Atrápalo was the leader for sector visits and achieved the highest notoriety index in its history. This is a campaign based on an involving story. Atrápalo inserts its product as an incentive in the middle of a story, a game in which the user is the protagonist and has a principal role: end the plague of “trappers”. The mechanics of the promotion provoked the user not only to interact with the campaign, but also to go off in search of it. The public’s attraction in the search for “trappers” was such that bloggers and Atrápalo partners requested placing a “trapper” banner on their websites, and the plague ended up reaching more than 100 sites. Bronze Cannes Lions Promo Winner. 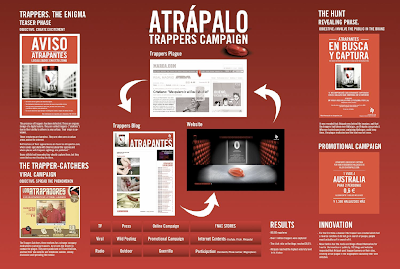