They were asked to launch a new low carbohydrate beer into a market already flooded with low carb brands. Our beer has only 1/3 carbs, so they decided to operate like a charity, giving away the other 2/3 to people who love carbs the most. Americans. The more beer Australians drank, the more carbs they could donate to hungry Americans. The 6-month sales target was achieved in the first 3 weeks, selling over one million Litres of white stag. It was so popular that trade demanded it be made available on tap some 21 months earlier than originally planned. They thought that was pretty good. White Stag beer had 2/3 carbs to spare. Since Americans seem to love oversized meals and high carbohydrates, they were the perfect recipients. Australians have also had a longstanding love/hate relationship with America, which made them the perfect recipients of our excess carbs. Bronze Cannes Lions Promo Winner. 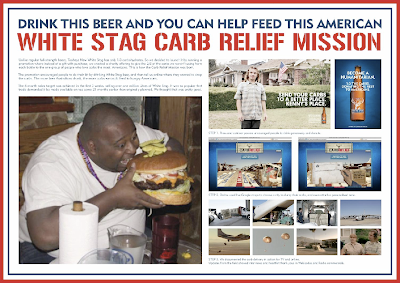