Refugee Aid Belgium (Vluchtelingenhulp België) was concerned about the arbitrary criteria the Belgian government uses to decide with refugee can stay and which refugee has to be expelled. Due to a lack of legal guidelines life changing decisions are often based on no more than appearances. To show this painful reality they simply forced normal people like you and me to trade places with the official jury and in this way experience the inefficiency of the procedure. 5 real refugees were seated in a glass house in the centre of Brussels. Passers-by were asked to participate in ‘The Refugee Game Show’ and vote for their favourite refugee. Only the winner could stay in Belgium, the others were to be deported. Just like the government officials the passers-by had to make a tough, life changing decision based on just a few simple facts : name, age, place of birth and most important of all, looks. People could vote on the website, and it got flooded with votes and outraged mails. The glass house appeared on every news broadcast, made every paper and hundreds of blog-sites. The media pressure was so strong that during the formation of the new Belgian government the first policy all parties agreed on was the urgent reform of the Belgian immigration policy. They couldn’t have asked for more. Bronze Cannes Lions Media Winner. 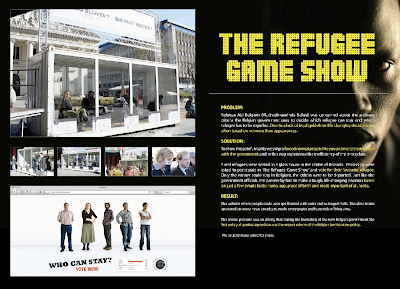