1. Create buzz around the launch of the Nokia N96 by launching a promotional limited edition. 2. Create a burning desire for the N96 Bruce Lee Limited Edition beyond rational reasoning to part with a price equivalent of 5 month’s salary in China. The Nokia N96 Bruce Lee Limited Edition came complete with a laser-engraved back cover featuring Bruce Lee's face, an ENTERBAY Bruce Lee Game of Death collectable figurine, nunchaku dongle, limited edition poster and special embedded content (ringtone, images, etc). The Nokia N96 is a 'powerful' internet and multimedia device, including the ability to watch movies. Bruce Lee is a cult hero admired for his mastery of the 'powerful' martial art, Kung Fu. 2008 was when the N96, Nokia's flagship at the time, launched and the 35th anniversary of Bruce Lee's death. They saw a tactical promotional opportunity to launch a limited edition N96 to create buzz around the N96 and a cool factor for the Nokia brand. Their communication idea was to capture Bruce Lee fans' imaginations by bringing their legend back to life. What started as a China-only promotion spread the globe like wildfire. It's a breakthrough at Nokia and sits proudly atop Nokia's marketing activation excellence hall of fame. Results: - 16+ million views globally exceeding target by 16x - 1.2+ million unique visitors to campaign site v target of 10,000 - Click-through rate of 7.5% v target 1% - 10,000s of comments, links, forwards... - All online stock ordered in LESS THAN 5 DAYS - Estimated value in 'earned media' more than US$3 million (multiplying cost of buying a 90sec spot by views using ad rates of sites YouTube, Youku, etc. Their Chinese tech and style leading audience lives most of their life online and are heavy users of social networking sites. Being leaders, they reject mass preferring instead to be the first to discover and the social kudos that brings. Viral, an internet 'dialect', was the perfect way to reach them in their language and excite them enough to get them to the campaign site where they could explore more and place an order. Retail theatre was used to capture imaginations in-store. Silver & Bronze Cannes Lions Promo Winner. 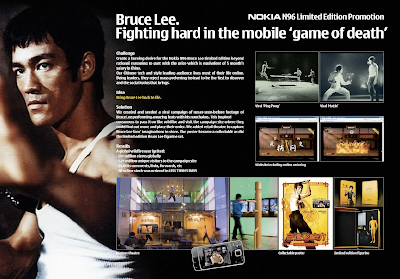