After Carlton Draught's success with the 'Skytroop’ TVC, they were asked to create an interactive promotion, which leveraged this imagery. Contestants donated their crappy old car (the ‘bomb’) during a two week radio promotion hosted by Australia’s most popular drive-time radio team, “Hamish and Andy”. The audience decided the winner (Gill) by voting online on the worst ‘bomb’. A second contestant (Bill) was chosen via an on-pack promotion. It was Bill’s job to decide when to drop Gill’s car out of a plane flying at 14,000 feet. The deal was, if he hit a 1km target on the ground, he won $100,000. If he missed, he and Gill got nothing. Highest March sales in history. Every free-to-air national news show aired the story at prime time. $1.29 million of unpaid media was acheived. For two days Hamish & Andy devoted their entire two hour, prime-time show to the promotion. Daily audience: 992,000. New records for the Hamish & Andy show. 200,000 video downloads in two days. 1,230,000 unique web impressions over a three day period. On pack entries: 53,748 Cars donated: 163. Promoted on in-store posters, cartons and the web, the contestants entered online using a unique code found on Carlton Draught cartons. On the day of the drop, six 90 second webisodes streamed live from the Hamish and Andy website, watched by 992,000 people each day. Viral films followed online. The target market was 18 to 40 year old urban, educated guys who want to enjoy life by having a balance between work and play. Carlton Draught has begun to be synonymous with large scale, funny, dumb stunts. 2x Bronze Cannes Lions Promo Winner. 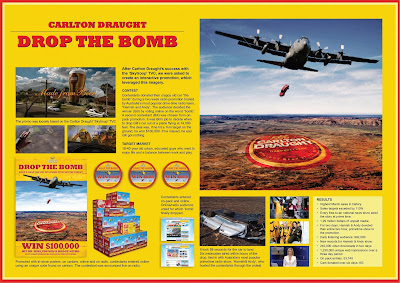