Youth Off The Streets "The longer they're here..."

There are over 100,000 children living on the streets in Australia. As the name suggests, Youth Off The Streets is a charity that supports these young Australians as they work to turn their lives around and overcome immense personal traumas such as neglect and physical, psychological and emotional abuse. Their challenge was to increase awareness of youth-homelessness and prompt people to donate to Youth Off The Streets. A series of disturbing proven facts were at the heart of the idea. In the words of Father Chris Reilly, founder of Youth Off The Streets: “Once you’re on the streets, you’ll be sexually assaulted within two or three days, you’ll be a drug addict within five days, and be dead before you’re 21, if you don’t get help.” Put simply, the longer a child is on the streets, the worse it gets. They created life size, die-cut street posters of children, printed on low-grade stock and featuring a URL and phone number for donations. They then carefully scouted and selected a variety of urban locations in which they were confident the posters would rapidly degenerate. Their “The longer they’re here ...” street posters were thus an un-ignorable metaphor for exactly what happens to children on the street. As time passed, they were sun-bleached and slightly ragged, then torn, defaced and abused. Then finally, after weeks of crying out for help, they were gone. The campaign ran in December 2008. It attracted national press and radio and international online coverage. During the campaign period, a total of AU$92,000 in donations was received - enough to provide hot meals to over 200 kids every night for six months. Online donations increased by a massive 400%. 2x Bronze Cannes Lions Media Winner. 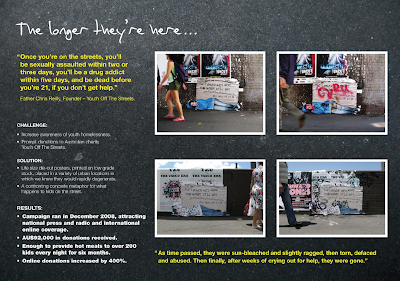