Overnight, Kit Kat had become available in an additional 20,000 locations and was even being promoted by this traditional Japanese organization. it was an entirely new, and competition-free, retail channel. The campaign received PR coverage on national news and throughout the blogosphere, totaling more than US$11 million in free media exposure. In fact, the campaign was so successful, Japan Post established Kit Kat Mail as a permanent product offering in their outlets. The first, and only, outside product offered by Japan Post. An innovative package of KIt Kat that can dropped into any post office box. Simply write your message, stamp it, and mail it. Kit Kat Mail was available at post offices all across the country. At key locations, entire post offices were even decorated and converted into special Kit Kat Mail stores. Shelf space commands a premium in crowded Japan. Especially for impulse items such as snack food, where shelf space also plays an important role as media. It was in this environment that they closely watched the government's plan to privatize Japan's postal services. Japan Post was the nation's most familiar government division with more than 20,000 post offices reaching every neighborhood in the country. A visit to Japan Post had become a part of everyday life. They recognized the opening up of this conservative institution as a once-in-a-lifetime opportunity. So they approached the newly privatized Japan Post with a proposal to co-develop an entirely new postal product. This was the first time in history for such a collaboration. The result was Kit Kat Mail. Grand Prix Cannes Lions Media Winner. 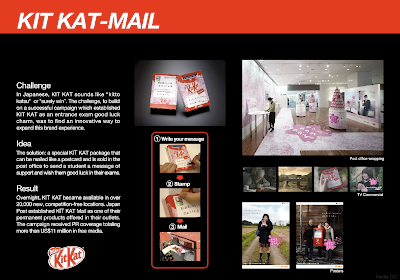 Posted by Marc van Wageningen at 9:37 AM