In New Zealand, the Yellow Pages was seen as an old fashioned book that was no longer the best place for people to find businesses. New online directories such as Google were gaining dominance. As a result of this perception, Yellow was finding it increasingly difficult to sell listings in their books. Their brief was to show that Yellow is still the best place in New Zealand to find every business you need. This wasn’t a metaphor or a nice warm fuzzy ad with great special effects. This was a single minded product demonstration. Using Yellow and nothing but Yellow was at the core of it. Every business, service and product needed to build the restaurant was found using Yellow. The businesses who helped were featured and there was a link on the site back to their business. It proved to the public that you can get any job done using Yellow and proved to businesses that it pays to be in Yellow. And they got to build something really amazing. Show that you can get any job done using nothing but Yellow. But they knew that building a birdbath or a garage wouldn’t make people take notice. They needed a project that would capture people’s imagination and prove that you can complete the toughest job using nothing but Yellow. So what was the job? They decided to build a restaurant. 10 metres up a redwood tree. In just 66 days. And via DR TV, Radio, Print, Billboards, DM, Banners and their website, they got people all over New Zealand and around the world following our progress. Their yellowtreehouse.co.nz site attracted over 221,000 visitors, each spending an average of five minutes. Over 2,000 people dined at the restaurant. A further 2,000 tried but missed out. Unprompted recall of Yellow increased by 37%. Sales in Regional Yellow Pages Directories increased 6.7% year-on-year, with the highest increasing by 19%. (Across the board, sales in print directories are declining internationally). Yellow online usage increased by 11% to a record 1.02 million per month in November. Yellow book usage increased by 9.2%. The free media coverage this generated in NZ was worth over $3.5 million. Silver Cannes Lions Direct Winner. 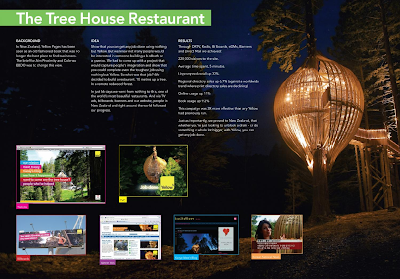