The Cup Noodle market is keenly contested by a few major players – one of which is Fantastic. Whilst Fantastic is a strong player, the category is very susceptible to price promotion. Their campaign objectives were to drive sales and, in doing so, create a stronger franchise for the Fantastic brand to make it less vulnerable to price promotional activity by competitor brands. The key strategic leap was a decision to shift the target to Fantastic’s end consumer (Generation Y males) rather than Female Main Grocery Buyers (who for the most part, buy the product). After spending some time talking to their target audience, they told them that life is too much fun to take everything seriously – especially cup noodles. They decided that the best approach to this campaign was, to use the technical term, “take the piss”. They developed a campaign called ‘Pimp My Kettle’. This was a parody of the MTV programme ‘Pimp My Ride’, but instead of cars, it was kettles. The campaign had many touch points including interstitials and in programme content on MTV, a website, radio, outdoor, magazine, street press, PR and a sampling programme featuring a pimped up van that toured Australia. The website featured kettles that had been ‘pimped’ by well known cult artists, such as Ben Frost and celebrities, such as Harry Kewell. As part of their MTV negotiations, an event was held at the MTV Gallery, Sydney. On the night, they held an auction of the pimped celebrity kettles to raise funds for the Youth Off the Streets charity. Our celebrity ‘pimpers’ and some lucky consumers attended the event which was a PR success. During the campaign, they also ran 2 national sales promotions featuring ‘pimped’ up prizes. There were over 40,000 unique visits to the Pimp My Kettle interactive website. Tracking research showed strong lifts in awareness, brand preference, intent to purchase and best tasting noodles scores and nearly half of their target audience said they had seen the campaign. Most importantly, sales throughout the campaign period were up by 34%. Bronze Cannes Lions Media Winner. 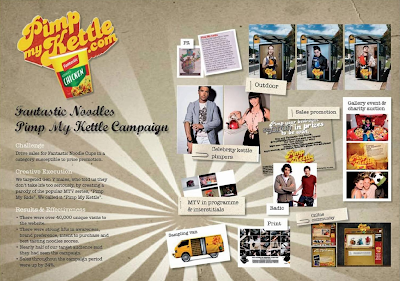