After Carlton Draught’s success with the “Big Ad” (which featured thousands of men in robes running around a field carrying beer), they were asked to create an interactive promotion, which leveraged this imagery. They devised a national media event to rival the famous Melbourne Cup Horse Race. Their team negotiated with the Spring Racing Board to stage a tongue-in-cheek race during what is considered a prestigious horse racing carnival. “The Carlton Draught Plastic Cup” was created. A televised event, 18 contestants competed for $100,000 first place prize money. They were disqualified if they finished the race with less than 200ml of beer in their plastic cup. Held on the home-straight, it has become the largest prize for any foot race in Australia. 4,469 participating outlets 14,611 entries Sales +6% vs. previous year Sales +11% vs. Sept ‘07. Free media support Radio $250k TV $3.2m+ Due to its wide appeal, the race has become an annual part of the Melbourne Spring Racing Carnival. Carlton Draught is the sponsor of the Spring Racing Carnival. They hijacked the event, which their target audience was already attending, and leveraged the brand’s values: being real and down to earth. The target market was 18–40 year old urban, educated guys who want to enjoy life by having a balance between work and play. Promoted on in-store posters, cartons, the web and television, the campaign also received $3.5m in free TV & radio media support. Contestants entered using an SMS code found on Carlton Draught cartons. Qualifiers won a place in the race and the chance to win the $100,000. 2x Bronze Cannes Lions Promo Winner. 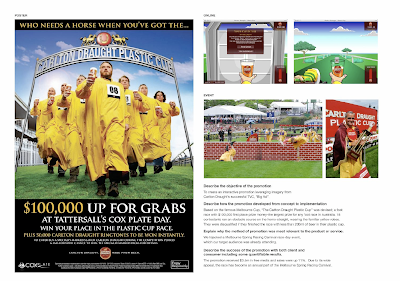