They were asked to find a new audience for the oldest film theatre in the Netherlands, De Uitkijk in Amsterdam. Like many other small, independent (art house) cinemas in Europe, De Uitkijk is facing shrinking audiences and is struggling to survive. The competition comes not only from so-called ‘multiplexes’ but also from home cinema and the Internet. De Uitkijk is looking for an increase in visitors of at least 10%. The target is a (preferably young) audience interested in ‘quality cinema’. Insight: The new generation of film fans watches and shares movies online. A whole new film culture is emerging outside the cinemas. To drive this ‘new generation’ of film fans to the De Uitkijk, a special film club was created: Upload Cinema. It’s goal was to bring the best videos of the web on to the silver screen. Every first Monday of the month, a fresh program of Internet shorts was screened at De Uitkijk. With a new theme each month. The audience could submit films from which an editorial team would select the best and compile a 90-minute program. Upload Cinema was launched the way many online communities are: by invitation only. Without any form of traditional advertising, just by word of mouth and ‘Member Get Member’ the club emerged rapidly. Upload Cinema has been a great success right from the start. From the original invitation mailing of 300, more than 500 members were recruited in just three months (target 250). All the screenings are fully booked (100% of the seating capacity). That’s four times more than usual on a Monday! (Target was 50%). The total number of visitors to De Uitkijk in the last three months of 2008 rose by 22% compared with 2007! (Target was 10%). A survey showed that out of the 38% of visitors who had never been to the film theater, 70% expressed interest in visiting De Uitkijk on other occasions. By bringing ‘the best of YouTube’ to the big screen, two audiences met: a new generation of film fans discovers De Uitkijk and ‘quality cinema’ while an older audience discovered the ‘wondrous world’ of web film. At the heart of the (ongoing) promotion campaign are the monthly theme evenings, which are introduced live by the editorial team. Creating an intimate and memorable cinema experience worth spreading amongst friends and relatives. And generating a lot of return visits. E-mail and website were used to inform, activate and connect (prospective) members. Low-budget posters and flyers are used in the cinema itself. Silver Cannes Lions Promo Winner. 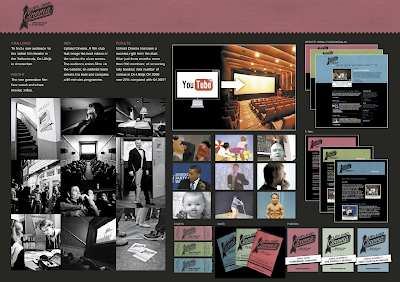