Use the largest circulated paper in the world! In India, violence and crime are on the rise. India needs Gandhi's message of peace and non-violence, once again. And who better to spread the message than Gandhi himself. Every Indian currency note has a picture of Gandhi on it. They decided to make Gandhi talk again by using this medium. They made post-its in the shape of speech blurbs which had Gandhi's quotes on it. People stuck these post-its next to Gandhi's picture on the note. So now every time the Indian currency note exchanges hands, so will Gandhi's messages. Post-it notes in the shape of speech-blurbs were printed which had quotes of Gandhi. Over 300 shopkeepers at Sarojini Nagar, New Delhi, a very crowded market where a bomb blast killed 53 people in 2005, have volunteered to distribute these to their customers. Every time they hand out change they stick a quote of Gandhi on the curency note and then give. So every time the currency note exchanged hands, so will Gandhi's message. 1. Over 300 shopkeepers have volunteered to take the idea forward by distributing the stickers to their customers. 2. The notes with Gandhi's message are in circulation. 3. Gandhi had started talking 61 years after he was killed. 4. The media has picked up the story and the idea is getting coverage in popular newspapers and television channels. Gandhi is back in circulation. Bronze Cannes Lions Media Winner. 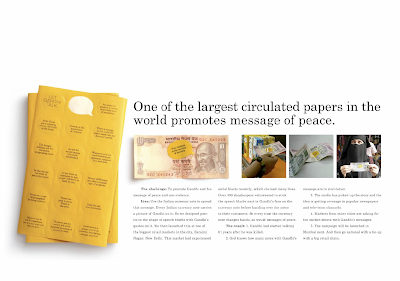