Every year, an estimated 2 million women and young girls are victims of trafficking. The tragic fact is that it is now possible for virtually anyone to buy a woman. Amnesty International’s task is to bring to their attention this outrageous violation of human rights. In order to inform the public about modern slavery they created a media campaign on the world’s largest auction platform. With the help of 188 Amnesty activists, they launched an overnight offensive, planned to the last detail. They used eBay to get our message across: In hundreds of live auctions, they offered women for sale. The message was always put into context of the respective product category. A closer look and the consumer discovered the ad’s true meaning and realized how shockingly easy it is to buy a woman these days. One day after its launch, the eBay attack was the cover story of Switzerland’s largest print media. The message spread quickly and within 48 hours, thousands of people had already signed the online petition against slavery. The eBay campaign generated countless media contacts on the internet. Thousands of news portals, including Spiegel.de, ORF, Yahoo News, MSN, Washington Post and the New York Times wrote about it. The topic was discussed in over a hundred blogs. But the campaign accomplished even more than its purpose: in 2009, a people’s initiative will be launched in Switzerland to protect women against human trafficking. Silver Cannes Lions Media Winner. 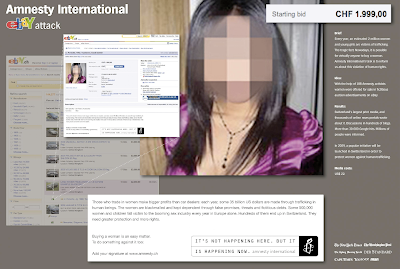