Conect "Village where nothing ever happens"

Pay TV Thematic channels have spent 20 years running advertising campaigns talking about its advertising efficiency. On 2008, they were looking for a different reaction. It was time to stop talking about efficiency and they decided to demonstrate it unequivocally through a real exercise involving four steps: 1) Choose an unknown and never-advertised-on-TV product. 2) Launch an advertising campaign only on Pay TV, with a clear call to action to the product and its website. 3) Measure variables (knowledge, awareness, traffic, sales) before, during and after. 4) Accredit Pay TV for the experiment’s efficiency and announce it to the market. The chosen product was Miravete de la Sierra: A tiny village with amiable people, on Sierra de Lastra, Maestrazgo County, Province of Teruel. Its 12 inhabitants became the stars in a real tourism campaign as if it were a much bigger and important city. Few weeks later, Miravete became a media and tourist phenomenon, attracting plenty of tourists and journalists. Since Pay TV was the only media channel involved, its role was direct and unquestionable. Subsequently, the “Miravete Case Study” was elaborated and detailed results were presented to media and advertisers in order to communicate the efficiency of Pay TV. They headed for a challenge: Create a different, unexpected tourism campaign. Amidst tourism campaigns that bear a huge offer of activities, they chose to invite people to do nothing: HERE NOTHING EVER HAPPENS HOW LONG HAS IT BEEN SINCE NOTHING HAPPENS TO YOU? Come to MIRAVETE www.thevillagewherenothingeverhappens.com Four TV Spots starred by its 12 inhabitants invited the viewers to the village and its website, which included: a. 3D virtual tour b. Reservation office c. Donations: Buying tiles to restore the Church d. Merchandising: Doll replicas of the inhabitants, ringtones, screensavers. e. Advergaming of the village’s most common activity: Goat milking. - Amidst the crisis, the thematic channels increased their advertising market share a 5.05% (value) and maintained its volume (seconds) against a decline of a 7,5% of general TV Stations. (Infoadex/Sofres); - 517,000 web visits; - Estimated Publicity: 574.540€; - Awareness: 498% increase, before 390.840, after 1.568.700 (IMOP); - Recall: 56% (CIMEC); - 10 times more visits than turismosevilla.org, Bilbao.net (Nielsen Netratings); - 650 links and references (YouTube, Facebook) (Infometrics); - The two village bed and breakfast booked solid for four months. 2x Gold, Silver Cannes Lions Direct Winner & 2 Silver, Bronze Cannes Lions Promo Winner. 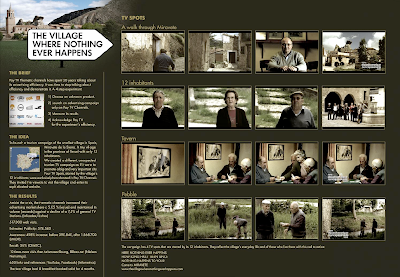 Posted by Marc van Wageningen at 10:48 AM